So today is Happy Mustang Day for me, it’s been exactly one year today since I became a custodian to my Mustang, which I named “ASBO” (no one ever really owns a Mustang, they’re too wild and free spirited, and we love, cherish and maintain them for the next generation of drivers!)
Some background as to why I was chosen by ASBO to become his custodian…

I had a company lease car a Ford Grand Tourneo Connect 7 seater MPV that in March 2018 I would be handing back, whilst a nice enough car, it had served a purpose. I started looking at what to get in May 2017 to replace the MPV and decided pretty soon that a modernish sport car at around 10 years old was going to be expensive to maintain as they would need specialist garage services, high insurance and just be of any age where lots of parts would start to be wearing out. Also new cars in my opinion have too many driver aids and too much electronics which will invariably cause all sort of problems that are hard to identify and rectify – image a 2018 Mustang in 50+ years time, will anyone be able to read the error codes, or be able to replace/fix the computers onboard?
I came to the conclusion that going for a really old sports car would be a better bet, as they would have been looked after, cared for, would be easy for myself to maintain (none of this plug in a computer bullshit lol), so the big question was what to look for.

Well I’ve always wanted an American V8 powered car, just love the sound, no 4 pot car will ever sound as good as a V8.
I also wanted a classic car built in 1965, the year I was born and to have 2 doors.
So what American V8 car to go for? These were the choices I had narrowed it down to….
· Chevy Chevelle
· Corvette Stingray
· Dodge Charger
· Ford Fairlane
· Ford GT40
· Ford Mustang
· Ford Thunderbird
· Pontiac GTO
Some were discounted due to the prices (GT40 lol) and others due to the rarity in the UK. I also started looking at the racing pedigree and spare parts availability and the social media support aspects – at the end of the day, there was a clear winner, the Ford Mustang!

So the search was one for a ’65 Mustang, I couldn’t afford the Fastback and didn’t want a convertible, so that left the Coupe.
Research on the racing side of the Mustangs revealed that Ford got Shelby to convert 16 Coupe’s to GT350 specification so that they could be homologated into the SCCA Group 2 TransAm race series. All of the Group 2 cars were originally in Wimbledon White, so that further narrowed down by choice. Ideally I’d be looking for a K code 271 bhp 289 V8 with 4 speed manual 65 Coupe, built in San Jos Coupe, in Wimbledon White – not many about and never found one for sale in the UK.

Eventually I found a good solid 65 Coupe, in Wimbledon White, with a “289” auto and built in San Jose. A deal was struck with the seller and on 31st July 2017 I had the keys in my hand.
First impressions were that the drums brakes were crap, and performance from the 289 felt pretty sluggish.
(I’ve since recorded a 0-60mph of 6.2 seconds which is 0.5 seconds faster than an original 65 Shelby GT350, so not sure what the previous owner has done to the 289, or even it it is a 289 as the block casting says it’s ’67 302)

So first job was to strip down the drums, where I found new shoes, but they hadn’t been adjusted very well, so I sorted out that.

A Petronix III ignition system with matching coil and leads and adjusting the timing helped a lot and hot starting issues we cured with a John Wolfe Racing 1” thick phenolic carb spacer.

Over the last 12 months I’ve been gradually transforming ASBO into a Group 2 tribute car, getting parts from Australia, China, Germany, UK, America and Canada.

Maintenance wise, it’s been pretty easy, various forums, YouTube and Google will get you the information in short order. I’ve fitted new oil, fuel and air filters, changed the oil and spark plugs, fitted the Petronix III Ignition, twice, installed a carb spacer, fitted new front springs, bushes and shockers. Taken out the fuel tank more times than I care to remember to try to get the fuel gauge to read correctly, eventually gave trying to calibrate the original and then ripped out the whole dash and replaced it with a full suite of GT350R gauges from Speedhut – job sorted!
I’ve also adjusted the clutch bands on the C4 autobox a couple of times and rebuilt the brake master cylinder.

I’ve got all the parts to replace the rear suspension and got a 4 speed wide ratio Toploader and Lakewood bellhousing to change the C4 over to manual in the near future.

Longer term plans are to fit FiTech 600bhp Power Adder fuel injection and a Paxton Novi 1200SL supercharger to a new 347 V8, with the aim of getting a respectable 600bhp. I’ll also be looking for a 9” axle to handle the power along with 4 wheel disc brakes and a complete re-wire, followed by a bare metal re-spray – should keep me busy in my retirement👍

In the last 365 days, there has been some ups and downs in my relationship with ASBO.
ASBO has only let be down on a couple of occasions in the last 5000 miles, within the first 2 weeks the battery died after the voltage regulator stopped working and fried the battery and the second time was when the new Petronix iginition system packed up, which was replaced free of charge within a couple of days by CJ Pony – good service😃

Highlights so far have been making many friends on the various forums, and meeting a few at the various meets and car shows, the best of which was The Gathering at Donington Park!

ABSO has already been featured in a music video, (soon to be released), and has been made the front cover photo on various Facebook groups and even got into Ford’s website. Later on in the year I’m also doing a wedding which should be fun.

So any regrets – none what so ever.

Advice to anyone thinking of getting a classic Mustang – get the best one you can find and afford, look at plenty and take a friend/mechanic to get a second opinion, but remember, the Mustang chooses you, not the other way 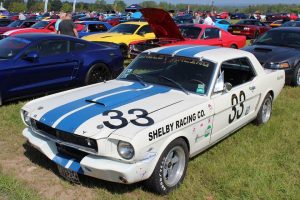 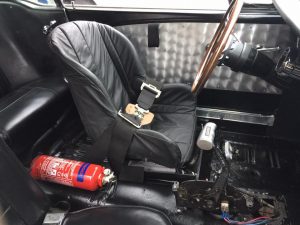 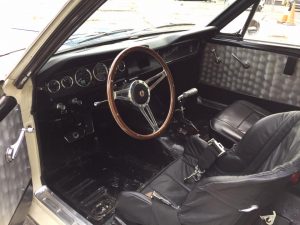 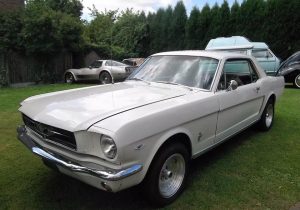